skip to main | skip to sidebar

@Make: Electronics Experiment 32 Robot Cart - Together and Working, need to pretty it up

This took WAY too long, due to my fumbling.  Earlier posts and videos showed it working on a breadboard,  I needed to solder the components and circuit to a Perma-Proto Board, then connect the wires from the cart (motor + and -,  switches NO and GND).

Here's a top view of the working product: 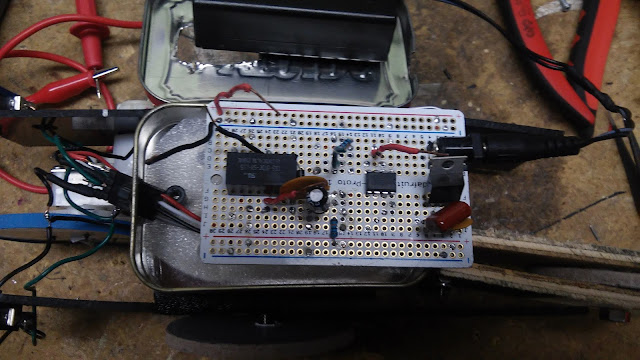 Note the 4-pin connector I used to connect the 4 wires mentioned above through a hole in the Altoids tin to the circuit board.  That allows me to unplug the components on the cart to work on the circuit board if (WHEN) I need to, What look like stray wires are stubs for testing.  I'll reduce those during cleanup. The switched 9V battery holder is riding in the cover now.  I'll attach it to  the top of the tin with Velcro after I close it up.  I think I need a new Altoids tin--I kind of butchered this one making holes.

I added the rubber band around the driving wheel after the video for traction. It couldn't run on the hardwood floor without it.

There were reasons why it too so long.  I used 3 Perma-Protos. I would get it working, then something would go haywire.  I had a short someplace. I lost about a day fussing wit the power supply (see the right side of the photo above). I had been using 10uf and 1uf capacitors, but looked at the LM7805 datasheet and saw that the sample uses 33uf and ,1uf (same as in the book, p 182).  DUH. It said .33...so I chased that for a while, buit ibn the right components and still had a short.

I could not see anything wrong, so I decided to do a new board.  Worked OK for a while, but eventually wound up with another short.  I was ready to give up and just use a breadboard, but decided to try one more board.  After fussing with all kind of connections, I moved the 555 and reconnected everything pin by pin.  Of course, I started with pin 1 and the problem was on pin 8.  I had decided to use a 3-pin female header across pins 7-8 and the next row to connect the 33uf capacitor, so I could swap other values in and out to adjust the backup time (since I removed the pot).
I must have had a cross connection due to sloppy soldering under the header, because when I soldered in the cap direcly I had no  problem.

Now I was in business, but I had a couple of recurring problems.  I cleaned up some stray solder and it appeared to be OK.  It took a week, but I did it.

I had everything working, connecting the cart to the circuit board with alligator leads.  I cut a 4-pin I2C cable in half to use as a connector to the cart, with the cut half to be soldered to the circuit board. I soldered the motor and switch wires to a strip of 4 extra long male header pins, and plugged that into the I2C connector. I tested the circuit after soldering each connection, and used head shrink to insulate the pins. The I soldered all the connections on the motor and switches.

What I need to do

Posted by Virgil Machine at 2:51 PM No comments:

Some of My Interests